The historic harbour of Charlestown is the perfect destination to discover Cornwall’s rich and mysterious seafaring heritage.

Two hundred years ago West Polmear, as it was then known, was a tiny fishing village with no harbour and only nine residents living among three cottages, making a living from catching pilchards. 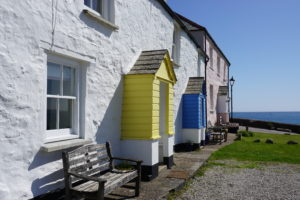 With the mines and China Clay pits in St Austell flourishing during the latter part of the 18th century, the need for a local port to offer security from the weather and suitable unloading facilities, became obvious to a local businessman by the name of Charles Rashleigh. With the aid of the plans of John Smeaton (a famous designer of lighthouses and harbours), Rashleigh began the mammoth task of constructing the harbour. The outer arm was completed first to shelter shipping and the inner piers were finished in stages after the rocks had been blasted away, manually cut and removed.

In addition to the harbour, Rashleigh built a gun battery to protect the village during the Napoleaonic Wars and this was also used by the ‘Huer’, the look-out man. He could spot shoals of fish and alert the village, guiding the boats to the fish once they had put to sea. The name of the village was changed in 1799 to honour Mr Charles Rashleigh, and became Charles’ town.

As many more ships used the harbour and local businesses began to flourish, the population grew, bringing the need for more cottages, a hotel, inn, chapel and eventually a church.

Although many of the industries of the time are now non-existent in the area, Charlestown still remains a working port and has found itself a place on the tourist map. Today it is a UNESCO World Heritage Site and its Grade II listed granite quay and resident tall ships provide the perfect backdrop for period dramas and pirate tales ranging from BBC’s Poldark and Treasure Island to Alice in Wonderland.