You probably know about Stonehenge... but what about Seahenge?

Did you feel it? That something in the air during the Summer Solstice. That warm sunny glow and a feeling of connection to those ancestors of ours thousands of years ago who marked their year by the movement of the sun.

As we celebrate the longest day of the year, basking in the warmth of the sunny days and hoping that summer never ends, the humans of the prehistoric past would also be celebrating the same event, year after year. In contrast to ourselves and our anticipation of leisurely enjoying the summer weeks ahead, they would already be looking towards the second half of the year, preparing for what lay ahead as they readied themselves for the days to become shorter.

The measuring of the year was crucial to the lives of communities and their people in the past. Knowing when to sow crops and when to harvest, before the invention of clocks and calendars was a difficult business and one with terrible consequences if misjudged. To help with this, early bronze age civilizations built monuments of such a scale that they impress us even today.

You only need to see an image of Stonehenge to understand the importance of being able to predict the precise moment at which the season changes and the days shorten. As part of a bigger calendar of celebrations, two of the most critical would be the Solstice, the days twice a year when the sun reaches its maximum or minimum tilt, marked by the longest and shortest days in June and December. It’s such crucial moment in the year that a henge was far more than just an elaborate astronomical device, structures such as Stonehenge would have been used for a variety of social purposes and celebrations that would highlight the importance.

You might be thinking, what does a Stonehenge have to do with shipwrecks?

One lesser known monument, constructed in Norfolk around 2,000 BC (500 years after the stones circle at Stonehenge was completed), is known as Seahenge. 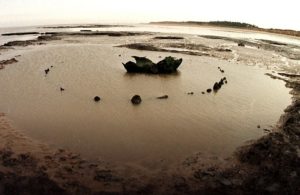 Though technically not a henge monument (that would require a raised bank and ditch surrounding the structure), the resemblance to the famous stone circle in Wiltshire drew immediate comparisons when this circle of wooden posts was found on Holme Beach after a tidal surge in 1998. With a diameter of 6.6 metres this site was made up of 55 closely fitting oak posts, each up to 3 metres in height, encircling a 2.5 metre tall upturned tree stump in the centre.

The purpose of this site is still largely unknown, though it is thought that the central tree stump was used at some point for a burial practice involving leaving a body exposed to the elements for the birds to pick clean, before burying the bones elsewhere. As with many of these monuments, Seahenge likely had more than one purpose and as an imposing structure within its local landscape, it was likely used to mark the summer solstice and as a place of congregation to celebrate such events. 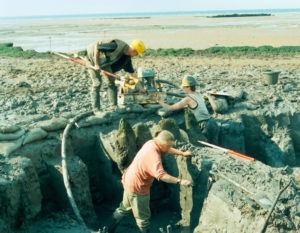 Over thousands of years the sea around the North Norfolk coast has eroded the salt marsh that Seahenge was built on and it is this erosion, spurred on by heavy storms, that revealed the monument on the beach nearly 25 years ago, when this storm cleared the protective peat from around the posts and exposed them to the salt water their decay began immediately.  Despite significant protests by druid groups wanting to keep a potentially sacred site in situ, work was immediately undertaken to excavate the structure before it would deteriorate. Despite the the tides only providing 2-4 hours per day to excavate the site the timbers were rescued, and preserved by the Mary Rose Trust before going on permanent display in the nearby Lynn museum in Norfolk.

A second timber circle on Holme Beach was later found and this time was left where it stands, with its decay being monitored and recorded. The debate continues as to whether or not such sites, exposed to the destructive powers of the sea, should be kept where they are to fade away into the sand, or if they should instead be excavated and preserved, though removed from their original context.

The answer to if Seahenge is a sacred site or purely secular is pretty clear…we don’t really know. Many historians don’t think so, but we can’t really be certain what the exact purpose was or have the exact right answer. The ongoing questions around preservation of the sites is very much the same and one very relevant to the world of maritime archaeology, should a wreck site be excavated and preserved? or left it be to the ruthless tides? With ongoing environmental changes, ever changing interpretation and frequent new context it’s probably a debate that will continue for a very long time.

If you found the remains of a past society on the beach, what would you do?