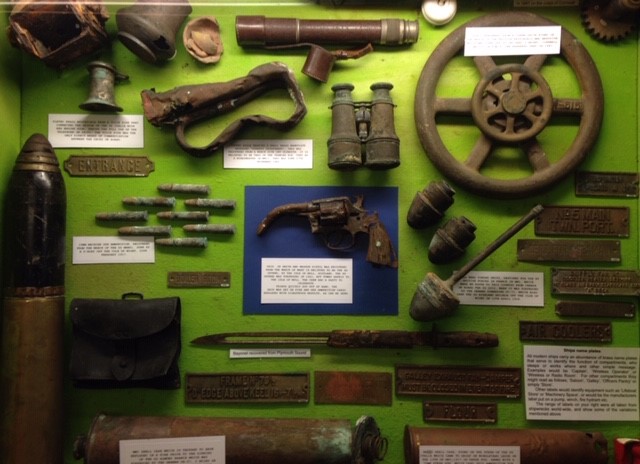 Visitors to the Shipwreck Treasure Museum can travel back in time and imagine what it was like to be a member of the British Navy uncovering stories from both World Wars. Explore the exhibition to learn the last words of the Captain of the RMS Mendi, discover why the HMS Edinburgh was known as ‘Edinburgh Gold’ and find out about the chase between a requisitioned British cruise liner carrying American troops and a German submarine. Read on to find out how shipwrecks from the wars have shaped our understanding of British naval combat.

The Scapa Flow is a sheltered body of water located in the Orkney Islands and has played an important part in trade, travel and conflict over the years. Beneath these waters lie the largest concentration of ships from both World Wars and became the resting place for the entire German high seas fleet of the First World War.

The First World War saw many naval ships succumb to conflict including the S.S. Aurania. As formerly mentioned, this British ship was carrying American troops when she was sunk by a German submarine in 1917 after an intense chase. Divers have recovered bottles, items of cutlery and silver-plated tableware from the wreckage which is on display in the Shipwreck Museum.

RMS Medina, once used as a Royal Yacht, was torpedoed by a German U-Boat off Start Point in Devon in 1917. In the hold was a valuable personal collection brought from India and belonging to Lord and Lady Carmichael. Included were horse riding accessories, golf clubs, crockery and coins.

​World War II saw advances of naval technology, arms and navigation, however, there are still many shipwrecks from this period of war. Returning to the Scapa Flow, British dreadnought, the Royal Oak, was sunk in October 1939 after a German U-Boat penetrated the British Navy’s main anchorage at Scapa Flow. With the loss of 833 lives, this is classed as one of the worst tragedies in British Naval history.

Infamous losses included HMS Edinburgh. Known as ‘Edinburgh Gold’ because of her cargo of gold bullion, she was torpedoed in 1942, but was sunk by HMS Destroyer to stop her cargo falling into enemy hands; two replica ingots are on display.

Other losses over the course of WWI include the R.M.S. Lusitania. Torpedoed off the south coast of Ireland on 7th May 1915, R.M.S. Lusitania sank in 350ft of water in less than 15 minutes with the loss of 1,198 civilians. Although claims were made that she was not carrying any war stores, it is alleged that she was in fact heavily armed. The loss of this ship is widely believed to have had a decisive influence of the decision of the USA to enter the First World War.

​HMS Exeter sank in the Java Sea near Borneo after being torpedoed in 1942. There are pictures and correspondence on display from a member of the crew who died on board.