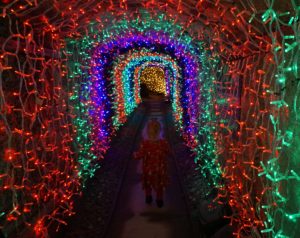 Here at the Shipwreck Treasure Museum we’re giving you the chance to explore Europe’s longest tunnel of festive lights this December!

Take a sneak peek of the festive tunnels here…

The subterranean passageways beneath our museum have been illuminated to create a unique Christmas attraction over the festive period.

4 kilometres of cabling and 40,000 lights have been used to decorate the walls to create the record-breaking festive tunnel.

Director of the Shipwreck Treasure Museum, Alex Smit, said, ‘we’re really excited to launch what we believe to be Europe’s longest underground festive tunnel of lights with over one hundred meters of illuminated passageways.’

‘It’s been a big task lighting up the tunnels ready for our launch on Saturday 7th December but we’re finally ready for Santa Claus’ arrival!’ he added.

Children and their families will be able to descend into the enchantingly lit tunnels before meeting Alabaster Snowball the elf and discovering Santa Claus in his underground grotto.

Earlier in 2019 the tunnels were opened in their entirety to the public for the first time in over 100 years.

The tunnels played a vital role in the late 19th Century china clay industry and the walls remain coated in the historic white clay today.

Located in the UNESCO World Heritage Site of Charlestown, the Shipwreck Treasure Museum is home to one of Europe’s largest collections of shipwreck treasures with over 8,000 artefacts in their collection, including the only intact barrel of coins ever recovered from the sea bed.

The Santa experience will take place at the Shipwreck Treasure Museum on the following dates with time-slots between 11 am and 6:30pm:

Tickets to enter the tunnels and see Santa Claus are £8 per child with a free accompanying adult and you can book online now here!