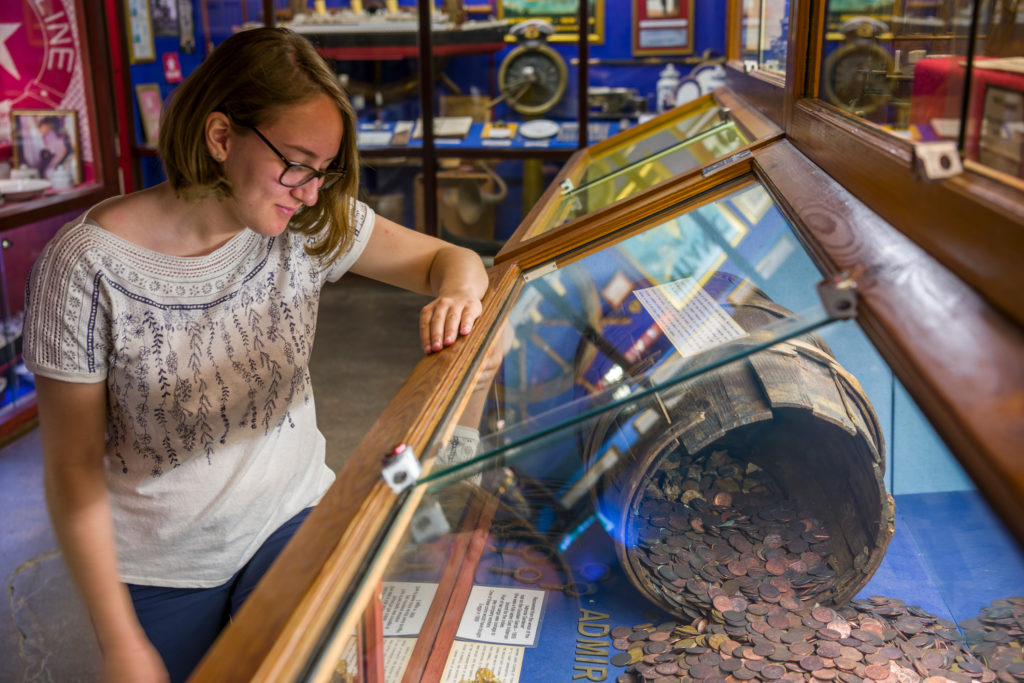 Among the Shipwreck Treasure Museum’s countless cabinets of curiosities there’s a flat glass case, which youngsters may have to stand on tip-toes to peer inside, which contains the world’s only fully recovered barrel of coins. The riches, reminiscent of piratical tales from Treasure Island, were discovered in the wreck of the English East Indiaman, Admiral Gardner at the bottom of the English Channel in 1979.

The vessel belonged to a European fleet which traded in the East India Companies. As these ships were sailing with lots of valuable goods on board, through dangerous waters, many were targets for piracy and were often fitted with an armoury of guns and artillery to defend themselves.

Built on the Thames in 1797, the Admiral Gardner was one of 2,679 ships owned or hired by the company. On 23rd January 1809, carrying a crew of 168 men, the vessel set sails for Madras, India. She had already made the voyage five times prior, however, on this fateful January night The Admiral Gardner became grounded when the anchor dragged along the seafloor off the coast of Kent and she hit a reef.

For reasons unknown, the pilot of the ship advised the captain to cut the anchor cable, then volunteered to perform the task himself. With axe in hand, the pilot approached the stern but somehow managed to gravely injure himself; chopping off two of his fingers. Delirious with pain he was carried below decks as the ship struck the reef and sealed its fate.

The ship lay undisturbed on the seabed until 1979, 170 years later, when a dredger accidentally discovered the archaeological site. Divers went to explore the wreck and found copper coins and ingots as a large part of its cargo; however only a single intact barrel of coins survived.

Professionally excavated and preserved, the copper cache was examined and it was revealed the coins had been minted in Birmingham and the metal used to make them was mined right here in Cornwall.

The extraordinary journey of these once glinting coins, destined for lands they’d never reach and eventually returning to their true birthplace in Cornwall, is just one of many fascinating stories which come to life here at the Shipwreck Treasure Museum.