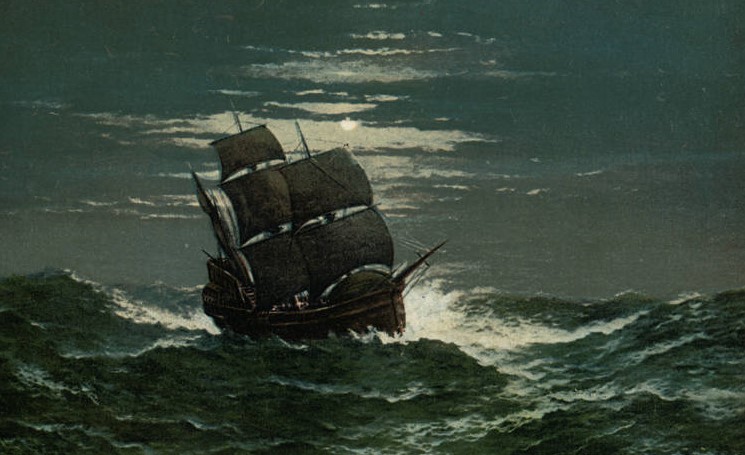 The relationship between people and the ocean is intertwined with adventure. Countless voyages throughout history have begun with a step into the unknown, often accompanied by the conflicting feelings of apprehension and anticipation, of nervousness and hope.

For these great expeditions, the fear of the hidden peril that they may face is overwhelmed by the tantalising possibility of the rewards of discovery. Some set sail for riches, others for fame, whilst many have just wished to start afresh in a new world with new opportunities.

One such voyage began 400 years ago on 16 September 1620 when an unremarkable looking ship, chartered by a group of English merchants called the London Adventurers, set sail from Plymouth with the aim crossing the Atlantic Ocean and creating a settlement on a newly acquired piece of land in Virginia.

On board this ship were 102 passengers, of whom 40 were religious dissidents, intent on establishing a new life for themselves where they could practice their faith without interference from the Church of England. These separatists called themselves ‘Saints’, though today we know them as the Pilgrims, and the ship which was carrying them to their new world was the Mayflower.

The Mayflower had been forced to travel across the ocean at the height of the North Atlantic storm season and during its voyage, where she was faced with waves of over 100 feet. During one such swell, a passenger, or ‘Stranger’ as the Pilgrims called their travel companions, was washed overboard, a fate which did not overly concern the Pilgrim leader William Bradford, who remarked of the poor individual that it was ‘the just hand of God upon him, for he had been a proud and very profane yonge man’.

These storms meant that the Mayflower was unable to reach her intended destination in Virginia and instead, after a 66-day journey, landed the passengers on Cape Cod where they established the settlement of Plymouth in modern day Massachusetts. The fate of the Mayflower is unknown, though she did complete a return voyage to England in 1621, no more is heard of her, apart from a rumour that her timbers were used in the construction of a barn in Buckinghamshire. An inauspicious end for a ship which completed one of the greatest expeditions of all.

There are few expeditions in history that were to have greater lasting consequences for the world than a voyage of four vessels which set out from London on 13th February 1601. Owned by the newly formed Company of Merchants of London Trading with the East Indies, this was to be the beginning of the story of the East India Company.

Led by James Lancaster following a Royal Charter issued by Elizabeth I, this fleet made the difficult and still largely unknown and dangerous journey around the coast of South Africa and past what the Portuguese had named Cabo das Tormentas (Cape of Storms), which had been renamed, rather optimistically, the Cape of Good Hope.

After arriving in Sumatra after crossing the Indian Ocean, Lancaster attempted to purchase pepper from his new acquaintances on the island using the goods he had brought from Europe. However, in the heat of Indonesia, heavy English linen clothing was not particularly desired and Lancaster was unable to trade for the goods which he desired.

Thinking on his feet, Lancaster set sail and came across a Portuguese carrack, which he captured and generously alleviated of its cargo of gold, silver and Indian textiles. Now in possession of valuable commodities, the fleet travelled to Java, where the price of pepper was lower than in the markets of Sumatra, and Lancaster was able to fill his ships with the spice which was to kickstart over two hundred years of prosperity and exploitation for this newly formed enterprise.

By the time this expedition made its journey back to England in 1603, Elizabeth I was dead, however her successor James I wasted no time in taking the crown’s share of the profits and gave his blessing for a further eleven voyages over the next nine years. The journey begun by James Lancaster would be repeated countless times until the construction of the Suez Canal in 1869 made the dangerous journey around the Cape of Storms unnecessary.

These are just two examples of extraordinary voyages which opened up new opportunities to those who undertook them and contributed a lasting legacy which we still live with today. They are by no means the only great expeditions across the oceans, but they are typical of the bravery and hope required to take a chance and peer over the horizon to see what is on the other side. Without such curiosity, the world would be a much smaller place.

Pain and Punishment at Sea