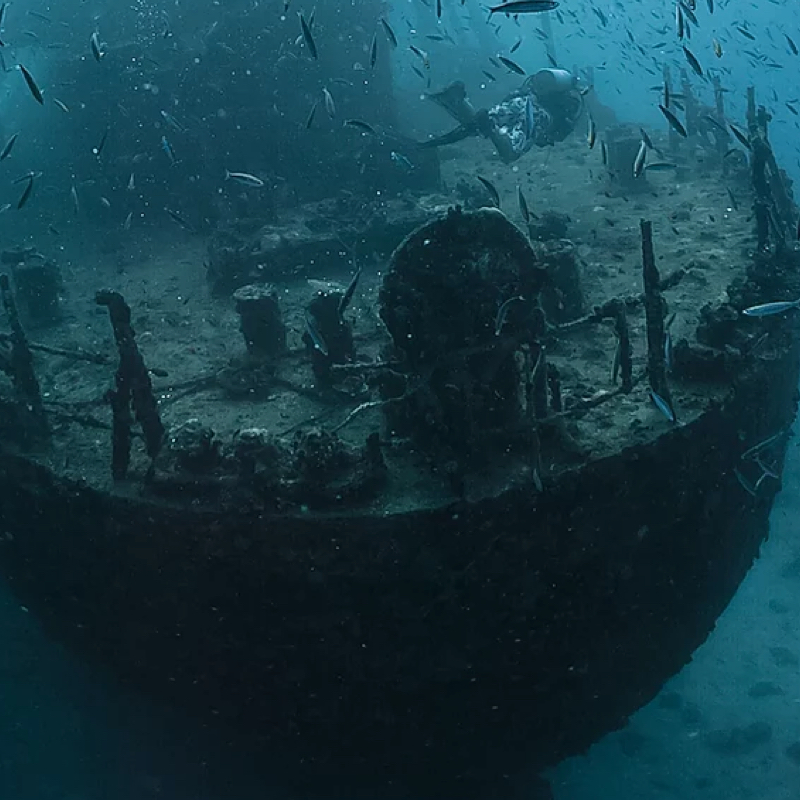 Here at the Shipwreck Treasure Museum visitors can discover a wealth of treasures with over 8,000 artefacts recovered from shipwrecks around the world. What many of our visitors find surprising is just how many of these wrecks are lying beneath the waves of the South West’s peninsular.

We’ve gathered some tales about the ten most interesting shipwrecks discovered in the Westcountry, read on to discover more:

Built in 1802, HMS Primrose was an 18-gun Brig. On 22nd January 1809, whilst sailing from Portsmouth to Corunna in Northern Spain carrying dispatches for the Peninsular war, the Primrose hit the Manacles Reef on the eastern coast of the Lizard. Of the 126 people on board, there was only one survivor, a seventeen year old boy who survived by clinging on to the mainmast, the only part of the ship that remained above water. Of the 125 who lost their lives in this disaster, 104 were buried in the churchyard of the nearby village of St Keverne, where their graves can still be seen today.

The Shipwreck Treasure Museum has several artefacts on display from the Primrose, the most striking of which is a bronze howitzer cannon salvaged in 1963.

One of the most prominent shipwrecks in recent memory, the Torrey Canyon was a 297 metre long oil tanker which ran aground on the Seven Stones Reef off the coast of Land’s End on 18th March 1967. Carrying 120,000 tons of crude oil from Kuwait, all of which spilled out into the ocean, the Torrey Canyon was both the largest vessel to be wrecked, and the largest oil spill at that point in history.

The disaster lead to the deaths of over 15,000 birds, and its impact on the environment changed the way in which people viewed the environment and the devastating impact that humans can have on it. Over two million gallons of a chemical detergent ‘BP 1002’ was used to attempt to break up and disperse the oil, by methods as diverse as members of the public using watering cans filled with the chemical on the beach, to entire barrels being pierced and rolled off cliffs into the sea. The chemical had the opposite effect and destroyed all marine life that it came into contact with, leading to areas where it was used needing up to 15 years to recover, five times the length of time it took for the recovery of areas where the oil was allowed to disperse naturally.

The disaster and the poor handling of the clean up operation led to improved methods of dealing with such disasters in the future, and helped to spread awareness of the importance of the marine environment.

At the Shipwreck Treasure Museum we have on display part of the propeller from the Torrey Canyon.

Lost in on 4th April 1684, the Schiedam was carrying ordinance and tools following the evacuation of British forces from Tangier, Morocco which was documented first hand by the English diarist Samuel Pepys. Originally a Dutch merchant ship, the Schiedam was captured by Barbary pirates who enslaved the crew in 1683, before being captured shortly afterwards by a Royal Navy ship captained by Cloudesley Shovell, who later went on to become the Lord Nelson of his day.

The Schiedam was rediscovered in 1971, before being covered again by the shifting sands of the bay. The wreck was uncovered once more in 2016, and the lies in the same location as that of a shipwreck and looting sequence that was filmed for the BBC drama Poldark in 2014.

On the night of 22nd October 1707, four Royal Navy warships were lost off the Isles of Scilly with up to 1550 sailors losing their lives including Cloudesley Shovell, who in the time since capturing the Schiedam (mentioned above) had been given a knighthood and made Admiral of the Fleet.

The ships lost were the 90-gun second-rate ship of the line HMS Association, the 70-gun third-rate HMS Eagle, the 50-gun fourth rate HMS Romney, and a fireship named HMS Firebrand.

Rumours persist regarding the death of Admiral Sir Cloudesley Shovell, with the most famous story being that he was murdered on a beach on the island of St Mary’s by a Scillonian woman who wanted his valuable emerald ring. His body was later interred with a large marble monument in the south choir aisle of Westminster Abbey.

The disaster was cause by inaccurate sea charts and the difficulty of taking accurate measurements to establish longitude at sea. At the time of the disaster the Isles of Scilly were recorded in sea charts as being 20 miles further south of their actual position, placing them close to the coast of Brittany, and even recently discovered Tahiti in the Pacific Ocean was more accurately mapped on contemporary sea charts.

The disaster led to the creation of the Board of Longitude which encouraged the development of the chronometer and the sextant to help establish a more accurate method of determining Longitude at sea.

The Shipwreck Treasure Museum houses the largest collection of artefacts from this disaster.

This unidentified wreck is situated at Asparagus Island in Kynance Cove on the Lizard. It is a small tidal island which contains a small tunnel on the South-West side. Although the wreck is unidentified, the items found on the site including coins and a fragment of a bell suggests that the vessel was of Dutch origin and has been dated to 1743. If you visit Kynance Cove on a beautiful summer’s day, it is hard to imagine how such an idyllic place could have been so treacherous for the crew of this ship.

Another ship that was lost on the Manacles Reef (See HMS Primrose, above) was the SS Mohegan which came to grief on 14th October 1898. Of the 197 people onboard, 106 lost their lives.

The Mohegan was described at the time as being ‘built for safety’ and contained eight watertight bulkheads, emergency lighting and pumping systems, as well as eight lifeboats. Unfortunately, only two lifeboats were launched during the disaster, one of which capsized immediately.

The captain’s headless body washed ashore three months later, and the majority of the bodies recovered were buried in a mass grave in St Keverne’s churchyard. The death of all of the officers onboard meant that no explanation could be found for the incorrect course the ship was following, a course that led to the disaster.

It is one of the most iconic and haunting dive sites in Cornwall. Unfortunately, due to its popularity and accessibility the site has been stripped of most of its objects. As a result, the collection at the Shipwreck Treasure Museum is the only known collection of Mohegan artefacts.

On the night of 29th December 1807 between 60 and 190 lives were lost when HMS Anson was shipwrecked at Loe Bar near Porthlevan. The uncertainty over the number of lives lost stems from the fact that a large number of the crew had originally been press ganged into service and subsequently deserted if they had survived the wreck.

HMS Anson was constructed in 1781, originally as a 64-gun third-rate ship of the line, but was downgraded to a 44-gun fifth-rate in 1784. The vessel was operating during the Napoleonic Wars and had been ordered to assist with the blockade of Brest at the time of its sinking.

The bodies that were recovered from the shipwreck were buried in a mass unmarked grave without being given any religious rites, leading to a national outcry over the treatment of shipwreck victims. This controversy led to the establishment of the Burial of Drowned Persons Act 1808, which stipulated that all bodies recovered from the sea were due a full burial in consecrated ground.

A further result of the disaster was the development of the breeches buoy method of sea rescue, which was invented and improved upon by Cornishman Henry Trengrouse, who was a witness and volunteer in the rescue efforts of the HMS Anson shipwreck.

The survival of ship’s medicine bottles and medical equipment from this period are extremely rare, and the Shipwreck Treasure Museum is fortunate to have such items in its collection.

The Merchant Vessel Cita was a container ship carrying items such as computing equipment, car tyres and parts, fridge magnets, and other commercial items from Southampton to Belfast. The Vessel was wrecked at Newfoundland Point, St Mary’s on the Isles of Scilly on 26th March 1997.

The reason given for the vessel running aground was that the watch officer had fallen asleep with the watch alarm switched off, and so was never alerted to the fact that the Cita had veered disastrously off course.

The items from this wreck make up the most modern part of the collection at the Shipwreck Treasure Museum.

Registered in Liverpool, the Douro was travelling to Portugal with a declared cargo of textiles and munitions, but was wrecked on the Western Rocks on the Isles of Scilly on 28th January 1843.

Divers in the 20th Century later discovered that the Douro had an undeclared cargo of brass manillas, a currency widely used in the slave trade on the West African Coast. This was a significant discovery because the slave trade had been abolished by the British government in 1807, followed by the abolition of slavery itself within the British Empire in 1833. With a wreck date of 1843 and having not declared the manillas as part of its cargo, the Douro was almost certainly participating in the illegal trading of slaves.

The shipwreck centre has many of these manillas from the Douro on display. Massed produced in England and often debased with cheaper metals such as lead, they tell the shameful story of how little the lives of fellow human beings were valued in the pursuit of profit and exploitation. Sadly the Douro is just one of countless ships that had evaded the British authorities in continuing to participate in this horrific trade, which over 350 years resulted in the forced transportation of over 12.5 million Africans to the New World, with around 2 million of those dying during the voyage.

On 5th October 1667 the Santo Christo de Costello, a Genoese merchant vessel sailing from Amsterdam to Genoa on its maiden voyage with a general cargo, was driven by gales to shelter in Mount’s Bay, where after laying at anchor for two days, was driven ashore at Mullion Cove on 7th October. 25 of the 120 people on board drowned, with the remainder escaping on the ship’s boats. It is most likely that the Santo Christo fell prey to the trap of sheltering too close to the cliffs during a gale before the wind changed direction, a trap that has claimed many ships over the years in that part of the coast.

The wreck was discovered in 1969 by Peter McBride who also enlisted the help of Roy Davis and the founder of the Shipwreck Centre, Richard Larn, to excavate and identify the wreck. A large quantity of sewing pins were found on the wreck which gave it the nickname of the Mullion Pin Wreck. The later discovery of a fragment of the ship’s bell allowed it to be identified as the Santo Christo de Costello. Other artefacts recovered include a sundial which ignited a small cannon to fire at a chosen hour, a brass ‘tobacco boy’ statuette, and rare examples of seventeenth century Dutch ordinance.

The Shipwreck Treasure Museum houses the only known collection of objects from this historically significant wreck.